How can you know how many downloads your app has in the appstore?

And until today, I cannot see any way to know if any of my apps have ever been downloaded and how many downloads they have had. Any idea about the process?

Thanks for posting. You can get sales number from Sales Reports in Developer Console. For more information please see the document: https://developer.amazon.com/docs/reports-promo/sales-reports.html

Unfortunately, those reports are incomplete.

We have an open case (over six months already), as for our paid apps Amazon is consistently under-reporting the number of downloads by about 40% (comparing to what our servers see). However, for our free apps, those reports actually over report downloads (potentially failed downloads - crashes?).

As those reports are financial statements, it would be good if Amazon would report all downloads, e.g., downloads made by Amazon test group in India (we see a lot of those), downloads made by a second device under the same end-user account (as such it is a free download).

This is incorrect because these are Sales Reports which means paid apps. Not every app is paid, I have some paid apps and the data is correct, but how do I know how many downloads your app has? This can help me prioritize which apps I should put a certain effort into or not. For example, 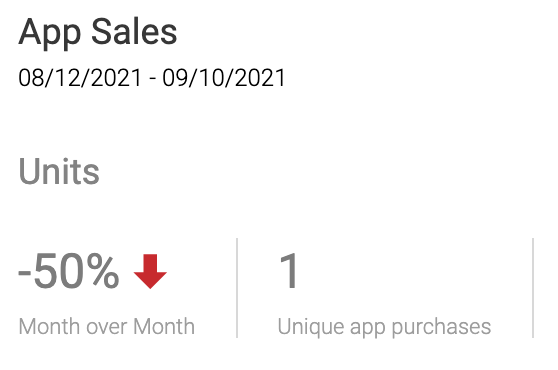 The data is clear: Unique app purchases. I don't know which apps are being downloaded and how many downloads I have per app.

Actually, Amazon does report app downloads. The upper-left chart in the Reporting section is for that. You can filter it by the app name. It matches what you see in those sales reports, but also has data for non-paid apps.

As you are asking the question about downloads, that implies that you do not have any logging on your server. Therefore, how can you tell that the number of new / unique downloads of your paid apps that is in that report is correct, because Amazon said so? Those paid app downloads are financial transactions, and from what we see are not reported properly.

We do log all the first time downloads for all our apps, and when comparing that with what is in those Amazon sales reports, we see about 40-50% less downloads reported by Amazon to what our servers see. On the other hand, for those not-paid apps, Amazon reports about 10% more than what we see (what is to be expected, as some downloads may fail, ...). When we switch an app from free to paid, and vice versa, we see that pattern being repeated the minute we do it.

If you search this forum, in January we opened a case about it to get some clarification, but so far we got zilch. It is still an open case, but there is zero progress on Amazon side.

We have asked Amazon to include in those reports also Amazon test team downloads, duplicates for user accounts, or basically all downloads that hit the app, but again, zilch.

If those missing paid app downloads are done on purpose, that would be one reason that Amazon is not providing data that you are asking for (all downloads whether test of end users initiated). If those downloads are just system problems, than clearly Amazon is doing zilch to correct it, and assure us that everything is as it supposed to be. Either way, bad.

So, the only thing that you can do is do such logging yourself, as you are not the first one that is asking for that feature.

4 People are following this question.

Why Amazon Appstore does not support Android 9.0 Pie?

Is there any way to filter the forum posts?