Here's what I'm talking about

It's getting a bit exhausting. Every time I submit a channel, I get a notice saying I need to verify that I have permission to use the brand - which is understandable.

But then I submit the proof, re-submit the app, and I get the same message again.

I have a channel pending publishing right now, where I've sent Amazon their requested "proof" three times now, through the contact form, and by e-mail. Each time, I re-submit the channel, and each time, I get the notice again.

Any advice? If this proof is not adequate, can I get some guidelines on what is required? 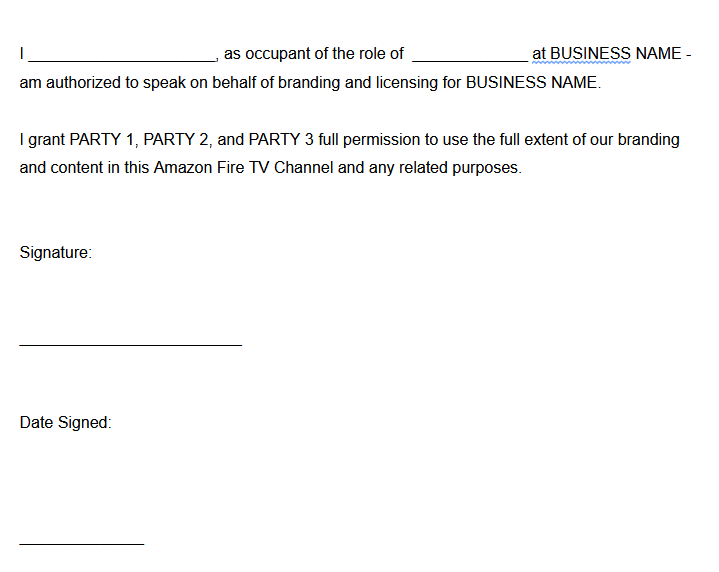 You are doing everything right. As you read Amazon guidelines, they only ask for a signature of IP right holder in that confirmation letter. You are not being asked to verify that signature, so doesn't really matter who sign it. The content of that letter is _your_ business, not really Amazon's (as long as the content indicates that the IP owner give rights to publish the app, of course).

The problem you are facing is that you are working with two separate teams that don't communicate with each other. The submission team looks like is paid by the number of tests they do, so they are incentivized to reject your app as many times as possible (they still run some short tests before the app is rejected). On the other hand, the 'letter verification' team is potentially working once a week or so, and that is your delay.

So, just keep submitting your app, write in the App File(s) / Testing Instructions that you have already submitted that confirmation letter and ask them to slow down, follow up with Contact Us, stating the same, and at some point the app will be approved. Although, resubmit every time your submission will hit the ETA, as the app may get stuck in the submission framework. The longest delay I saw was about a week. At that time, the submission team sent us an email that they will pull down our developer account - not sure whether that was just a bluff.

1 Person is following this question.

How do I prove that I am the Intellectual Property rights holder of my apps already published on my other stores (google, iOS)?

Can we publish a real money betting application on Amazon Appstore for specific Country if we have a valid license in this Country?

Its 2016, Amazon you really need to improve your communication channels.