How can I use DynamoDBAdapter with an Alexa Hosted Skill and have access to persistent_attributes?

I'm trying to use DynamoDB with an Alexa Hosted Skill and I'm running into what appears to be a permissions issue. I followed the instructions at https://developer.amazon.com/docs/hosted-skills/build-a-skill-end-to-end-using-an-alexa-hosted-skill.html#personal. However, instead of manually writing the code to access the DB, I was hoping to be able to use the persistent_attributes. I've tried both the StandardSkillBuilder and the CustomSkillBuilder, but neither one has allowed me to successfully use DynamoDB.

Here's the error message I'm seeing in the logs:

I was trying to allow the code to create the table itself since I wasn't completely sure what the partition key and sort key needed to be to work with using persistable_attributes. However, just to see if it would work, I tried setting create_table=False and then the error message changes what permission is being denied, but it still doesn't work. Instead, I get this error:

The only thing I knew to select as the trusted entity on the first step of role creation was Lambda. I was thinking I'd see something here specific to Alexa Hosted Skills, but I didn't: 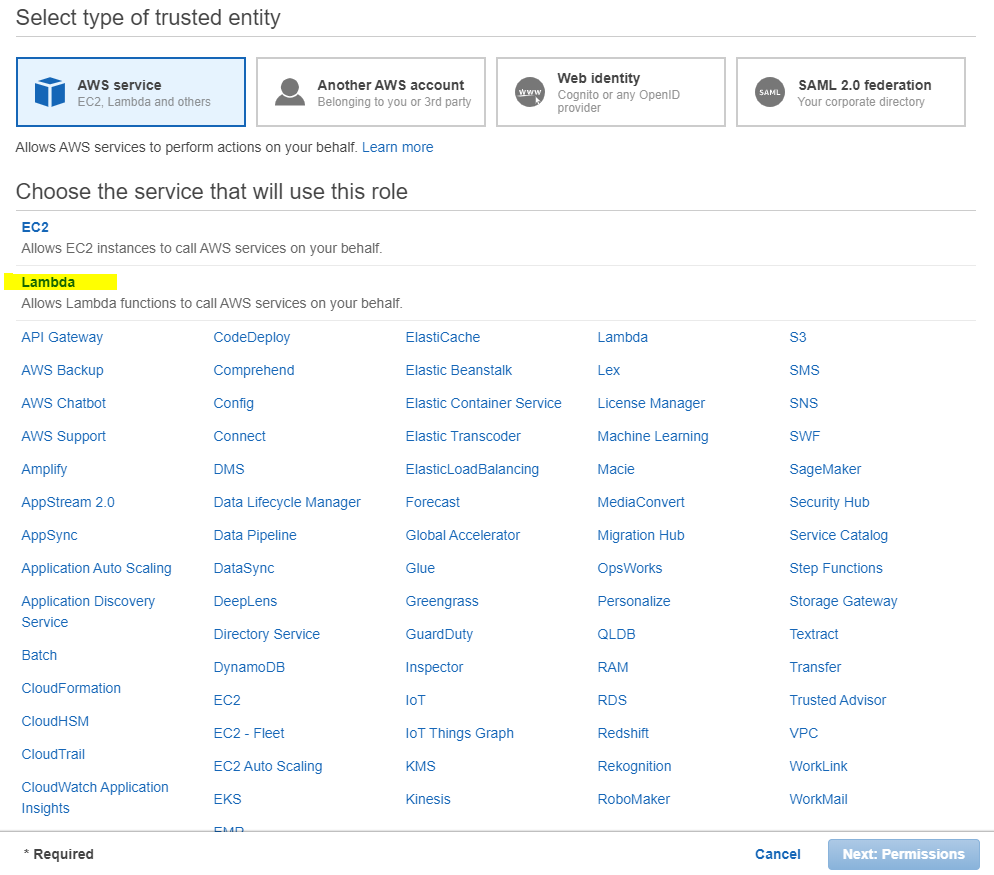 So when creating the role, I selected Lambda, Checked AmazonDynamoDBFullAccess, gave it a name and then tried to edit the trust relationships as instructed. However, I wasn't completely clear on the instructions for this step either. Should the existing policy statement be modified in my case or is it better to leave it there and just add the new one? I tried it both ways and it didn't help.

I noticed that in the error log the ARN appears to be arn:aws:sts::XXXXX:assumed-role/AlexaHostedSkillLambdaRole/XXXXX where the second set of XXXXX is a guid, but the ARN copied from my Alexa hosted skill link is different. It doesn't include the guid, has iam instead of sts, and has role instead of assumed-role. It is in the format: arn:aws:iam::XXXXX:role/AlexaHostedSkillLambdaRole. I took the ARN from the error message and changed the trust relationship policy to use that ARN instead, but that didn't seem to help either. Now I'm stumped about what to try next.

Do I have to give up the using the persistent_attributes and/or the benefits of an Alexa hosted skill and make my own Lambda function to get this to work?

After a few days of struggle, I think the main issue is that I needed to copy the ARN from the role that I set up in the IAM console and use that in the code instead of the ARN of the skill. Once that became apparent to me, I finally got past this roadblock. :-D

Can you explain how you solved this? I don't understand what you mean by "use that in the code".

In the Cake Walk tutorial it is explained how you can add attribute persistence in an Alexa Hosted Skill using DynamoDB.

I hope it helps you.

@barry@amazon - If you look at the Cakewalk tutorial that is not correct, but if you could share the piece with correct information would be grateful. Thank you.

Hello and thank you for your message.

The documentation has been updated and is now referring only to AWS S3. This page explains how to use your own personal AWS resources in conjunction with your Alexa-Hosted skill.

4 People are following this question.

Connection between the Alexa and the API of TMDB, doesnt work. Any ideas?