App fails to install on new JVC and Grundig devices

My recent app submission failed due to:

1. Purchase the app and install it from cloud

Expected Result: App should install successfully without any error message.

However, there it is a simple app and shouldn't be device specific. Works fine for all other Fire TV devices. What is the deal with these new ones? I don't think they are even available yet to test....

Hi @jason-m, we just got the same issue on our app that was recently promoted to upcoming.

I am also receiving the same issue from the Amazon store.

Can anyone advise us how to fix this issue?

Our WASK app was today approved for all Fire TV devices (including those listed by @jason-m, plus new cube and soundbar).

Our server is denying access to unknown devices, as such those two failed badly (basically UI didn't start, as index.html was broken).

So in our case, the actual tests were only running on Fire TV sticks (Gen 2), sticks 4K, and old cube, and from server logs all went fine on those. Somehow, they extrapolated those results to other devices.

Therefore, I cannot comment why your apps failed on those devices, since we passed without being tested. Although, my take is that maybe it has something to do with screen resolution. At least for all WASK apps, resolution is fixed to 1080p. If you also have WASK apps, maybe those new devices are running all apps in 4K, and the screen was messed up? Looking at those UAs, everything there is the same as on sticks, old cube (from WASK app point of view). If you run Android, those are maybe the first devices running v9, so that is another area to look at. Actually, when a device fails, Amazon provides a sample log under 'Review Status' panel, maybe you can look at those logs. If you feel that you are at loss, I would think about resubmitting the app, and writing in the comments that you want to see logs for those failed devices.

Although, what is really bad is the fact that Amazon introduced those devices to public already, is testing apps against those devices for some time, but doesn't bother to update developer pages with device specifications. The same thing was last year, so unfortunately looks like they don't care much. Although, I have to say that I love the idea. Don't provide specification, ask people in Elbonia to test, and hope for the best. In case you see obvious problems, kill that device. If you cannot see anything coming from that device, let it pass (our case)! Go Amazon, go!

The review status just says try installing it on the device (no logcat available). Not sure how I can proceed without the devices (which I can't reasonably get). 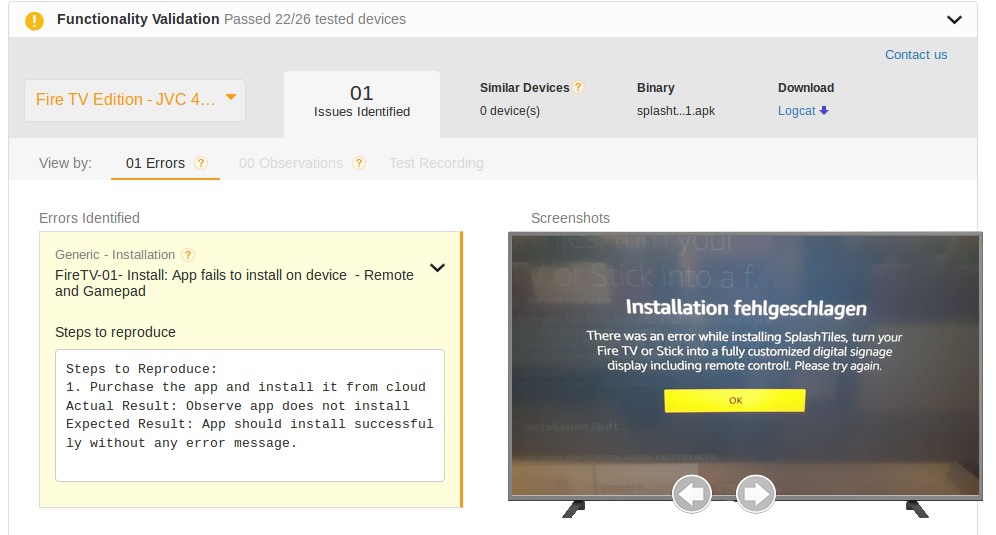 Is your app Android or a clean WASK?

In our case, that 'Download' section says 'Not available' (as our app passed without being tested), where in your case it says 'Logcat' ready for download. So, maybe they intended to provide some log, but instead linked to an empty file. I think that that testing outfit in Munich is rather new, so maybe they still struggle with some things.

You should start banging on 'Contact Us' to get more/better info, or have them clarify that Logcat link. You should also ask to have them retest and give you a better feedback. (They did retest our app when we saw in our logs some weird behavior, even though the app passed.)

I would also ask to clarify 'Purchase the app and install it from cloud.' Does it mean that the app was purchased (first installed) by device A, and it was successful, and after that they used device B from the same account, and that installation failed. Or rather the very first purchase/install for device A (first for that account) failed. I would think that the app is rather agnostic whether it is installed for the first time, or for the first time 'from cloud' (on a new device - no history). If that is the case, maybe there is a problem with Amazon, how they install apps, and some setups are more sensitive to such thing. But it also could mean that they installed the app on device A, deleted it, and tried to reinstall it on device A again. In this case, maybe there was some residue from the previous install, but in this case, they should have logs showing that the app was properly initialized, but refused to fully install due to some residue. Although, if that would be the case, all 'from cloud' installs on the original devices should fail, not just those new ones.

It is an Android app. Passed all the devices except the 4 new TVs. I have used the "contact us", but that usually take a couple of weeks to get feedback....

The app is free, so "purchasing" just means adding it to an Amazon account. Maybe some regional issue given the 4 new TVs are for the German market.

I'm guessing it is a problem on their end, but they don't tend to fix those very quickly. 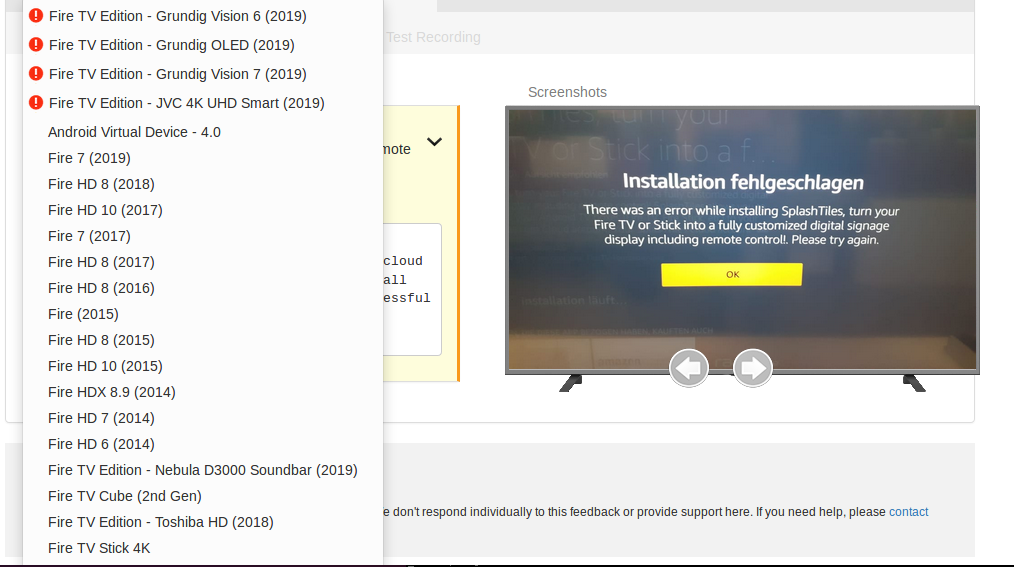 In Amazon lingo, 'purchasing' an app denotes the first installation for a given device. At least that is how I would try to interpret what they write.

Looking at those two UA strings I provided earlier, I would guess that AFTR is maybe Cube 2, and AFTEU014 one of those Grundig TVs. Since both indicate the same values, if it runs on Cube 2, it should run on those TVs (no manifest, no API level issues). Actually, I read again their announcement, and that JVC TV may be for UK market, so maybe even not specially localized (not sure whether for other countries as well).

It would be really a bummer, if you would need to tailor your apks for each country that is using a different language. I guess, that is not what Amazon wants, as when you run on a stick, you also run in Japan, India, ... that all have localized versions of Fire TVs.

Maybe one more thing you could ask is whether there would be a possibility for Amazon to somehow expose IP address of one of those TVs for you to use adb to try to load your apk (if they cannot provide logs).

Yeah, I know that 'Contact Us' really takes long time. I would send them a message about those issues once more, and let them know that you are re-submitting the app, and ask for help with those logs. Write a note in that 'Testing Instructions' (on App File' panel, that the purpose is just to re-test and get logs from those new TVs. And see what happens. Since we passed those test a couple days after you, maybe they changed something in the way they test.

This is happening to me as well. This is very poor support by amazon to catch us off guard like this. No communication or warning.

I am not sure what I can even do to move forward without possibly resubmitting without allowing the devices in question?

You need to play the game Amazon has set up:

1. Write to Contact Us for more info about those 4 devices

2. Write in 'Testing instructions' that you need [better] logs for those 4 devices, potentially adb output

3. Resubmit the app (with all devices selected)

If you fail again and there is no good info provided, go back to #1

My take is that if you (we) don't do it, testers in Elbonia are happy that they provide excellent feedback. Amazon in US is happy, as there is nothing to be done - you got stuck and have no clue how to fix your perfectly described issue.

I just switch off grundig's as a good 60% of time will fail testing, seems like theres is something amiss with the Grundig line

7 People are following this question.

App marked as not compatible with Fire TV