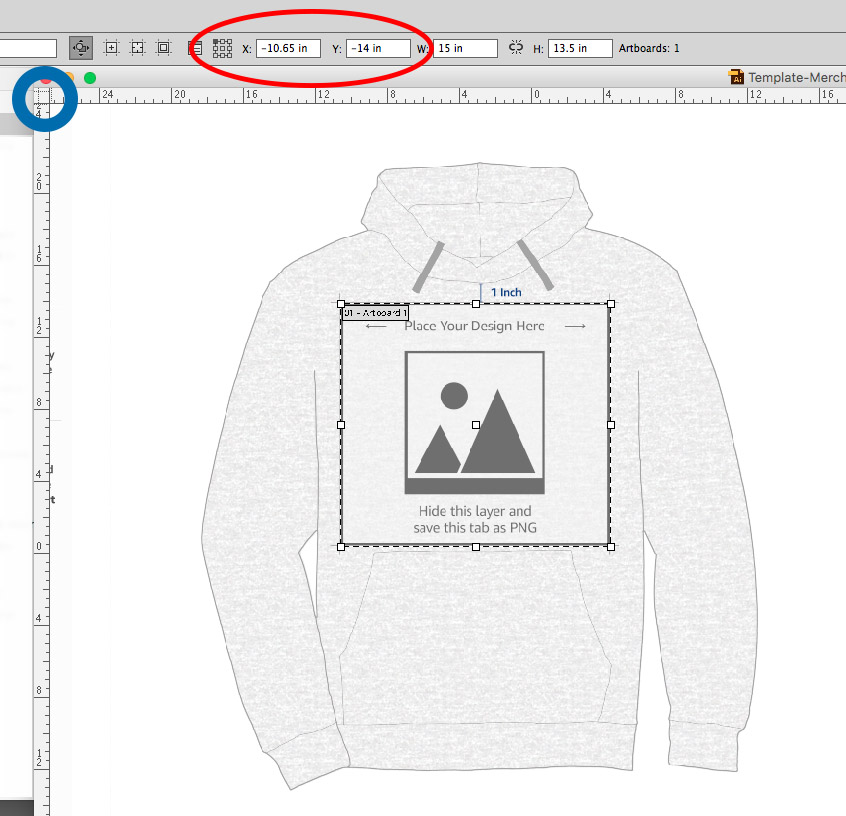 Several users are reporting a problem when using the provided Adobe Illustrator template for the 15x13.5 front of a Merch Hoodie. Upon exporting the PNG, it is one (1) pixel too large. The attached photo shows the X,Y coordinates of the top left corner of the artboard. Illustrator draws its first pixel based not on the artboard, but on the overall "working space" in which the artboard is created. Since the artboard is at a position within this working space that is not 0,0, the first pixel is drawn partly outside the artboard; this causes the last pixel to not fill the artboard, so Illustrator adds ONE pixel to the overall PNG size. The template that Merch provides should be corrected so that the X,Y coordinates of the top left of the artboard are 0,0. Users can easily do this by double-clicking the small square where the rulers intersect, in the top left corner of the window (circled in blue in my screenshot).

Note that for some reason, I cannot reproduce this one-pixel problem, but it has been reported several times in other forums; this Artboard issue has been the cause of the problem 100% of the time. It is entirely possible that the person who created the template will also not be able to reproduce the issue. Nevertheless, I am sure that this small correction needs to be made asap.

I mentioned this here a few weeks ago and no one took any notice.

I resolved the issue on my own. In your Illustrator toolbar, edit the artboard width dimensions from 1080px to 1079.7px. This will then save as exactly 4500px after exporting and the extra pixel is gone.

I searched for the problem before posting. This forum is hard to use. Anyway: The correct answer is in my post.

how did you get px to show instead of inches?

Hello Everyone, I just wanted to provide an update on this thread. The team has informed me that they've updated the template so this should no longer be an issue moving forward. Thank you everyone for the patience!

Share your great idea, or help out by voting for other people's ideas.

No one has followed this idea yet.

Send an introductory email when signing up

Enable larger preview of a shirt while in design mode.

MBA Should Give All Users Access to Amazon Marketing Services.